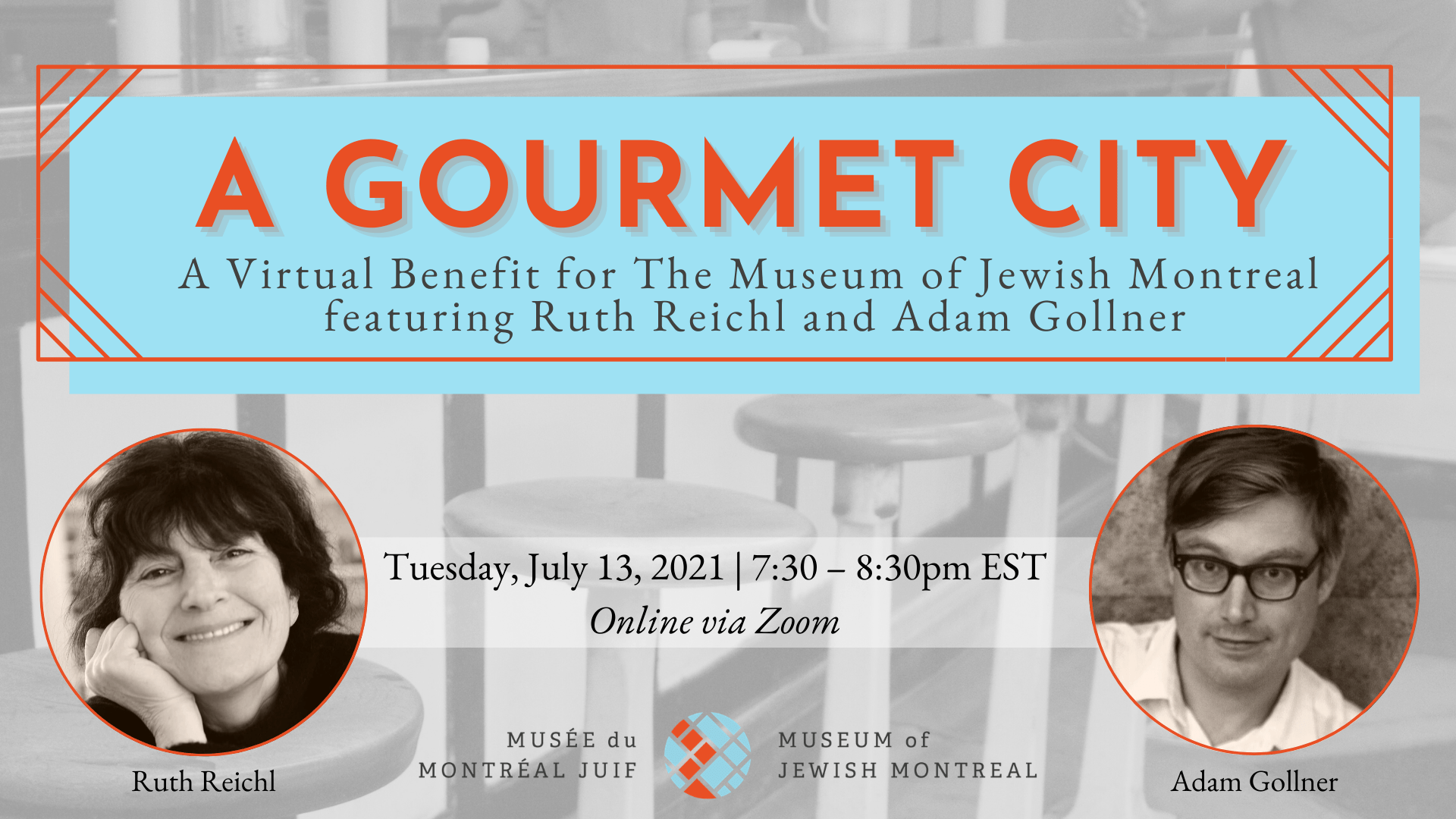 For generations, Jewish tradition has played a leading role in Montreal’s cultural identity. Whether it’s the tender sesame bagels or smoked meat on rye, some of the city’s most iconic foods have strong and enduring Jewish roots. Since the Museum of Jewish Montreal began just over a decade ago, we’ve striven to increase public appreciation of Montreal’s Jewish life and culture, through such programs as our popular food workshops and tours. It is safe to say that we are a proud proponent of our city’s culinary conversation.

In March 2006 – ten years before the Museum opened our first physical location – Gourmet Magazine published an issue devoted to Montreal. Its pages showcased the city’s most beloved Jewish eateries in the Plateau and Mile End neighbourhoods: St-Viateur Bagels, Schwartz’s Deli, and Wilensky’s Light Lunch, just to name a few. For the first time on such a scale, culinary landmarks that were familiar to Montrealers were introduced to readers across the world in an issue that flew off newsstands everywhere. In what seemed like an instant, Montreal became a culinary capital, with Jewish delicacies at its core.

To celebrate the fifteenth anniversary of this momentous issue, we will be joined with two prominent figures behind the publication: Gourmet’s former Editor-In-Chief, Ruth Reichl, as well as the issue’s guest editor and current Mile End resident, Adam Gollner. Moderated by Lara Rabinovitch, whose PhD research covered Montreal’s Jewish culinary history, this panel will discuss what makes Montreal so special, and how Jewish culture – and especially its food – makes it so unusual and so beloved.

All proceeds from this benefit will go towards the next year of cultural, artistic, and heritage programming at the Museum of Jewish Montreal. We are getting ready to launch an exciting new chapter of our Museum’s story, filled with connection and creativity, and led by young adults who are excited to create the future of Jewish life in Montreal. The future is happening here, and we look forward to you joining us in this endeavour.

Ruth Reichl is a food writer, journalist, and former Editor-in-Chief of Gourmet Magazine (1999-2009). Prior to that, Ruth worked as a restaurant critic and food editor for the Los Angeles Times and The New York Times. She has authored five memoirs, including Save Me the Plums (2019). Ruth edited Best American Food Writing 2018, and The Modern Library Food Series. She was Executive Producer and host of the public television series, Adventures with Ruth and a judge on Top Chef Masters. She is the recipient of six James Beard Awards. Ruth’s most recent project is a documentary about the many ways the pandemic has altered the food landscape.

Adam Gollner is the author of The Book of Immortality, The Fruit Hunters and Working in the Bathtub. The former Montreal correspondent for Gourmet, his writing appears in The New York Times, The Paris Review, Vanity Fair, The Smithsonian, GQ, and The New Yorker online. He lives in the Mile End neighbourhood of Montreal.

Lara Rabinovitch, PhD, is a writer and consultant with deep roots in Montreal. She specializes in food, restaurant culture, and immigrant history. Her work has appeared in the Los Angeles Times, Saveur, The Globe & Mail, and other media outlets. She is Co-Curator of the upcoming exhibition at the Skirball Cultural Center, I’ll Have What She’s Having: The Jewish Deli.

Tickets can be purchased through Simplyk here. For all information about ticket levels and what they offer, please read below:

Young(er) Adults: $36
Eligible for guests ages 36 and under. This level offers admission for one household to the virtual event.

Chef’s Table: $540
This level offers general admission for one household to the virtual event, a box of 12 macarons (Glatt Kosher, dairy & gluten-free), and a special selection of kosher-style gifts inspired by Ruth Reichl’s favourite things, all delivered to your home.*

Critic’s Table: $720
Includes entrance to an exclusive VIP online meet-and-greet with Ruth Reichl after the main event from 8:30-9:00pm! This level ticket offers general admission for one household to the virtual event, a box of 12 macarons (Glatt Kosher, dairy & gluten-free), and a special selection of kosher-style gifts inspired by Ruth Reichl’s favourite things, all delivered to your home.*

For dessert (Gourmet Table, Chef’s Table, and Critic’s Table): Dessert delivery available only in Canada. Event-day delivery by courier only guaranteed to residents on the Island of Montreal. Attendees outside of Montreal will receive their dessert via Canada Post. All recipients will receive delivery notifications. Dessert tickets must be purchased by Thursday, July 8.

For gift box (Chef’s Table and Critic’s Table): Delivery available only in Canada. All recipients will receive delivery and shipment notifications. In order to receive your gift box in time for the event, tickets must be ordered by Monday, July 5. Orders placed after this date will arrive following the event.

PLEASE NOTE: A Zoom link will be sent to you via email shortly before the event is scheduled to begin. All ticket prices are in CAD. Charitable receipts (provided following the event) are only valid for those with Canadian addresses. As this event is a benefit, your charitable receipt will reflect your ticket price with cost of event advantages deducted.