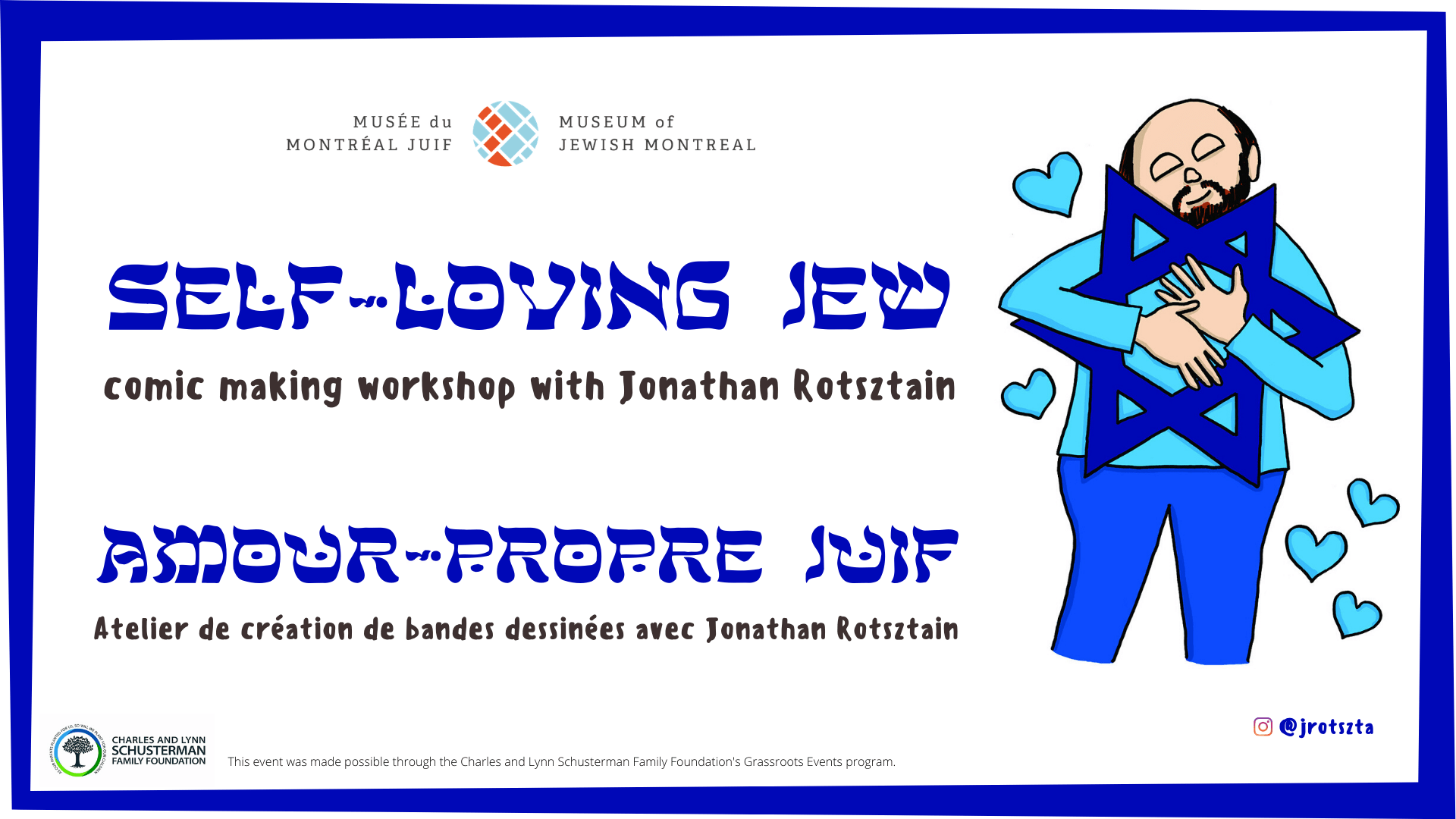 Join us at the Museum of Jewish Montreal for Jonathan Rotsztain‘s “Self-Loving Jew” comic making workshop!

In this hands-on artist-guided workshop, Rotsztain will introduce his own comic work and and other graphic narratives around identity. Following a brief discussion on Jewish religious and cultural history, participants will come together to share their own views on ways to reconcile their own cultural baggage or Jewish identity to the challenges of modern life. Rotsztain will then lead participants of any experience or skill-level through the process of creating their own Self-Loving Jew comics, empowering participants to articulate their own self-love strategies in easily digestible, highly shareable comic strips!

This workshop is open to participants of all backgrounds and ages! We ask that participants under the age of 12 be accompanied by an adult who is also participating in the workshop. Tickets are $7 (plus applicable fees), supplies will be provided but participants are welcome to bring their own sketchbooks, favourite pens, pencils or rulers!

Please join us after the workshop at the opening vernissage for Jonathan Rotsztain’s Patterns installation on display at The Museum of Jewish Montreal.

Jonathan Rotsztain’s “Self-Loving Jew” comic series asserts a contemporary, cultural Jewish identity. The work is a secular reclamation of the self-hating Jew slur. As published in the Canadian Jewish News, The Forward and Koffler Centre of the Arts digital platform, each comic book essay seeks to briefly explore a topic of religious significance while challenging and embracing the various contradictions of reconciling these practices with secular life. Self-Loving Jew comics are an engaging attempt to establish a new discourse that embraces a Jewish future based on knowledge and respect for Jewish religious practices while acknowledging an equal place for Jews of all orientations, backgrounds and value considerations.

Jonathan Rotsztain is an artist, writer and graphic designer based in Toronto. He earned his MFA from the Center for Cartoon Studies in Vermont and has participated in the Yiddish Book Center’s TENT: Comics seminar and two Asylum Arts Jewish arts retreats. His artwork has recently appeared in the Zap! Pow! Oy! – Jews and the Comic Book Industry group show, Gateways group show at the Toronto Island Jack Layton Ferry Terminal and in his debut solo show Patterns at Toronto’s FENTSTER Gallery. His comics have appeared in Metro, Carte Blanche, Noah Richler’s 2015 federal election memoir The Candidate: Fear and Loathing on the Campaign Trail.

This event was made possible through the Charles and Lynn Schusterman Family Foundation’s Grassroots Events program.