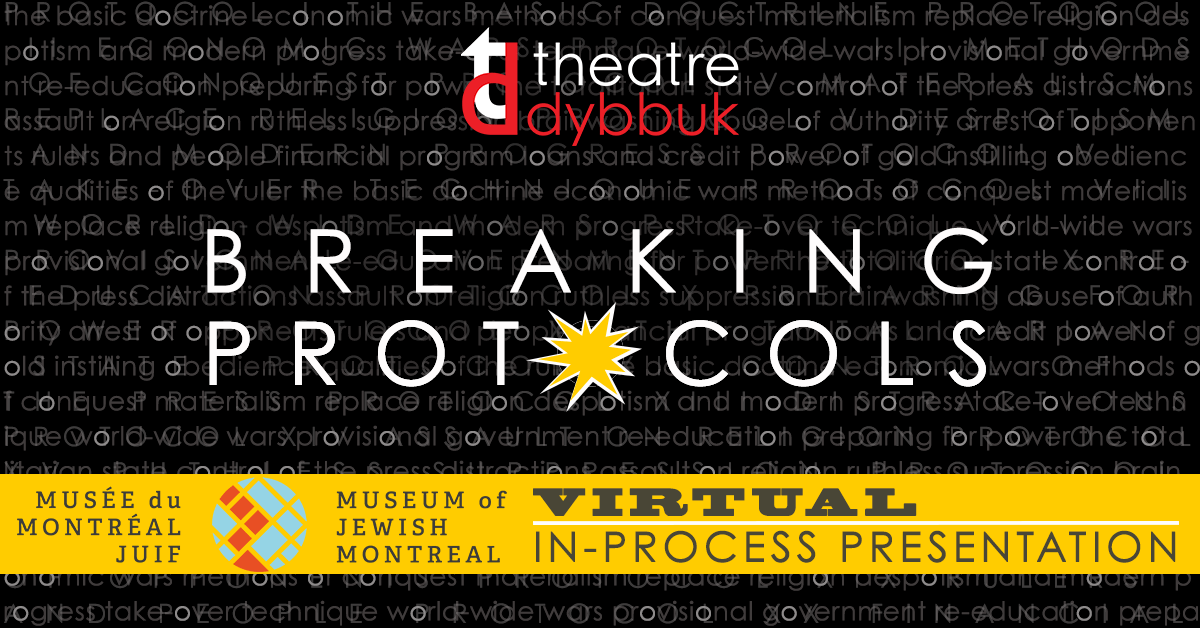 Hosted in partnership with the Museum of Jewish Montreal, theatre dybbuk will present a virtual in-process presentation of its latest work-in-progress, breaking protocols. The approximately 60-minute event will be presented through Zoom and will include readings from the in-process script performed by the show’s ensemble, as well as a chat with theatre dybbuk’s artistic director. Immediately following the discussion, the audience is also invited to participate in an optional 30-minute writing workshop that explores the themes of the show.

Set in the U.S. on the eve of the 1940 election, breaking protocols examines the quintessential antisemitic text, “The Protocols of the Elders of Zion,” through the lens of a decaying vaudeville troupe using the tricks of the trade to try to set the record straight. Through “The Protocols,” theatre dybbuk’s performance will explore contemporary issues connected to racism, propaganda, and false narratives.

About “The Protocols of the Elders of Zion”

Supposedly the record of secret meetings of Jewish leaders, “The Protocols of the Elders of Zion” describes an alleged conspiracy to dominate the world. Nowhere in “The Protocols” does it indicate when or where the meetings took place, who attended, or who authored it. “The Protocols” was first published in 1903 (an abbreviated version) in the St. Petersburg newspaper Znamya (The Banner); it was published in its entirety in 1905 as an appendix to the book The Great in the Small and the Antichrist as an Imminent Political Possibility by Sergei Nilus.

In 1920 in the U.S., Henry Ford published The International Jew: The World’s Foremost Problem, a compilation of a series of articles largely based on “The Protocols” that appeared in Ford’s Dearborn Independent newspaper. It sold more than 500,000 copies and was translated into at least 16 languages.

Despite the fact that it has been thoroughly discredited as a fraud (first by Irish journalist Philip Graves in a series of articles in The Times of London in 1921), “The Protocols” continues to be a touchpoint and inspiration for antisemitic groups world-wide.

This event is free and will be held via Zoom. Please register in advance by clicking this link. You will receive the Zoom link one hour before the event. If you wish to make a donation, you’ll have the option to do so upon registration. Any amount is greatly appreciated. Thank you!