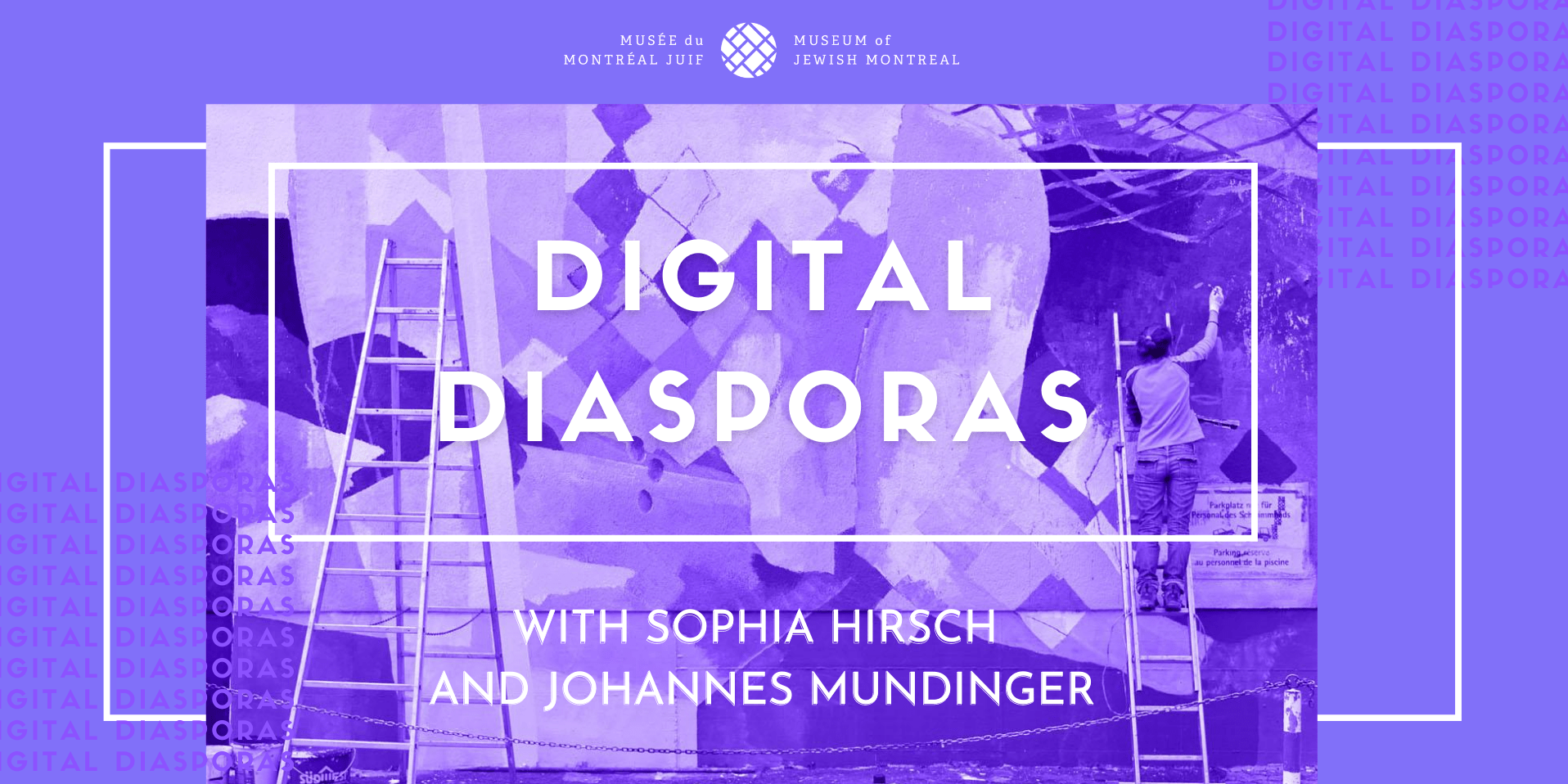 We are thrilled to announce the August edition of our Digital Diasporas series with invited international multidisciplinary artists Sophia Hirsch and Johannes Mundinger!

Sophia and Johannes were originally invited by the Museum of Jewish Montreal to exhibit a newly created gallery installation Public Intimacy from May 2020 – August 2020, and to paint an outdoor mural during Montreal’s 2020 MURAL Festival. Due to the COVID19 pandemic and related travel restrictions, we had to postpone Sophia and Johannes’ exhibition and mural until 2021.

Join us August 26th at 3pm on Zoom for an introduction to their collaborative artistic practice, and what new projects they have been working on in these uncertain times.

This event is free and will be held via Zoom.

Please register in advance by clicking here this link. You will receive the Zoom link one hour before the event. If you wish to make a donation, you’ll have the option to do so upon registration. Any amount is greatly appreciated. Thank you!

Sophia and Johannes have worked with institutions such as the Galicia Jewish Museum Kraków (2014), the Ravensbrück Concentration Camp Memorial, Berlin (2018), painted a mural for the commemoration of the 1944 Warsaw Uprising in Berlin (2014) and another mural inspired by Polish Jewish artist Jankel Adler for the Museum of Lodz and Urban Forms Lodz (2017).

In 2013 they won the jury prize of the Berliner Kunstverein for their installation Kritische Masse and were invited as artists in Residence to UMI Art Center Uzupis, Vilnius, Lithuania (2014), The Art Cube Artists Studius, Jerusalem (2017) or Yeobaek Seowon, Gyenggi-Do, South Korea (2019).

They painted murals for numerous institutions and cities, mostly within Europe, but also in Mexico, Russia and Israel. In April 2020, Sophia and Johannes completed a triptych mural commissioned by the Sachsenhausen Concentration Camp Memorial and Museum to commemorate the 75th anniversary of the camp’s liberation.

Sophia Hirsch was born 1987 in Berlin and is based in Halle, Germany and graduated from the Weißensee Academie of Art, Berlin, and has also studied at University of Art and Design, Halle and Bezalel Academy of Art, Jerusalem. Sophia Hirsch has been working as art educator at the Memorial for the former concentration camp Sachsenhausen, Berlin, since 2012.

Johannes Mundinger was born 1982 in Offenburg, Germany, and is based in Berlin. He graduated from Münster School of Design, his exchange studies led him to the Academy of Fine Arts, Brussels.

Much as a diaspora describes the dispersal of a people across space, this series explores the new movements artists are taking away from their practice in the digital world or how they are working in ways that forge new communities and connections despite geographic distance. In short, it’s a series about being apart, together. Join us each month as selected artists take us through their practice prior to the pandemic, their innovations in response to social distancing, and their visions for the future.
—