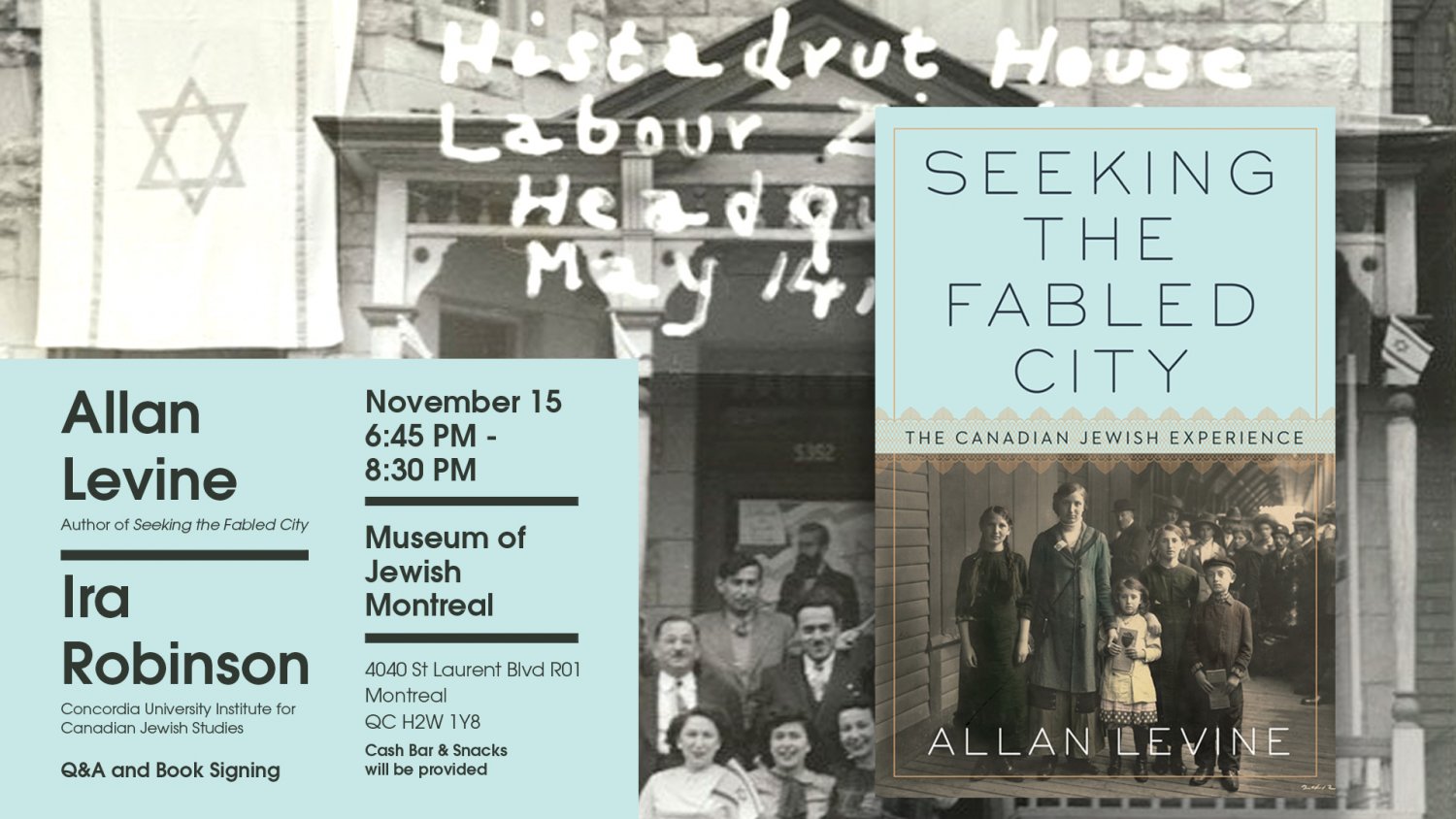 *The Museum can accommodate a limited number of guests for this event. Registration is therefore suggested via the link below*

The Museum of Jewish Montreal, Concordia Institute for Canadian Jewish Studies and Penguin Random House Canada invite you for an evening of discussion between Allan Levine (author of Seeking the Fabled City) and Ira Robinson (Chair and Director of the Concordia Institute for Canadian Jewish Studies). The discussion will focus on the trends and patterns of Canadian Jewish history over the course of 250 years—the evolution of “Jewish Canadians” into “Canadian Jews” and the acceptance of tolerance as an integral aspect of Canadian society on the Canadian Jewish community. Why is Canada arguably one of the best places in the world for Jewish life? Discussion will be followed by Q&A and book signing.

ABOUT THIS BOOK…
In this definitive and meticulously researched account of the Jewish experience in Canada, award-winning and critically acclaimed author Allan Levine documents a story that is rich, accessible, often surprising, and epic in its scope. Relying on an abundance of primary sources and first-hand documentation and interviews, Seeking the Fabled City chronicles the successes and failures, the obstacles overcome and those not conquered, of a historic journey and the people who travelled it.
Seeking the Fabled City is a story that unfolds over 250 years–from the decade after the conquest of New France in 1759, when small numbers of Sephardic Jews of Spanish and Portuguese descent arrived in British North America, through the great wave of Russian and Eastern European Jewish immigration at the turn of the twentieth century, to the present, in which Canada’s large Jewish community, no longer hindered by the anti-Semitism of the past, is free to flourish. This is a chronicle of a people that takes place at hundreds of locales across the country–mainly in the large urban centres of Montreal, Toronto, Vancouver, and Winnipeg, but also in west coast and maritime villages and tiny prairie towns–in a riveting drama with a cast of thousands.

ABOUT THIS AUTHOR…
ALLAN LEVINE has written thirteen books including Toronto: Biography of a City (2014) and King: William Lyon Mackenzie King: A Life Guided by the Hand of Destiny (2011), which won the Alexander Kennedy Isbister Award for Non-Fiction. His book Coming of Age: A History of the Jewish People of Manitoba (2009) won the McNally-Robinson Book of the Year and the Best History Book Award at the Canadian Jewish Book Awards in 2010, and was the co-winner of the J.I. Segal Prize in Canadian Jewish History.