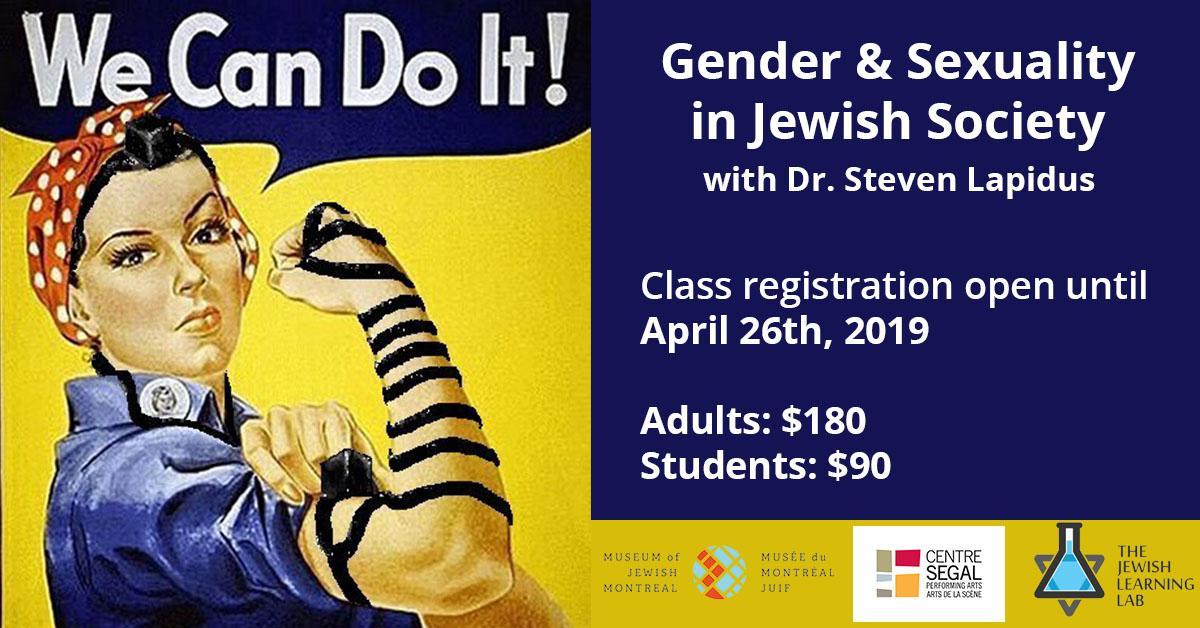 From a sex-positive Biblical period, through a Christian and Greek-influenced medieval ambivalence about sex, to a modern engagement in identity politics, Jews and Judaism have had a lot to say about sex and gender.
This seminar is designed to trace the history of Jewish sexual attitudes and behaviours across multiple periods and social realities. Join Dr. Steven Lapidus as we explore how Jewish approaches to sex and gender have evolved over the centuries.
This is 7 session course, presented by the Museum of Jewish Montreal with the Jewish Learning Lab and the Segal Centre for Performing Arts, includes 6 seminars and an invitation to the dress rehearsal of Indecent, with an exclusive behind-the-scenes talk at the Segal Centre.
REGISTER HERE
Class is 6:30-8:30 on Tuesdays (with one exception; see below).
Course calendar overview:
April 27 – Class trip to Indecent at The Segal Centre for Performing Arts
Class 1 – Tuesday, April 30
**Class 2 – Wednesday, May 8**
Class 3 – Tuesday, May 14
Class 4 – Tuesday, May 21
Class 5 – Wednesday, May 28
Class 6 – Tuesday, June 4
Course Enrolment HAS BEEN EXTENDED to April 26th, and is available online HERE, via phone (514-840-9300), and in-person at the Museum of Jewish Montreal.
Course prices:
General – $180
Student (with ID) – $90
This course will be taught in English.
About Dr. Steven Lapidus:
Steven Lapidus is a Montreal-based scholar of the history of Orthodox Judaism.  He has taught courses in western religions, sexuality and religion, Jewish history and culture at Concordia University, where he received his doctorate, as well as at the State University of New York at Plattsburgh and McGill University. A former co-curator at the Montreal Holocaust Memorial Centre, he has published articles and book chapters in both English and French on a variety of topics, including history of sexuality and Jewish history.
+ Google Calendar+ iCal Export