Snapshots from the Garden of Eden – Dina Goldstein 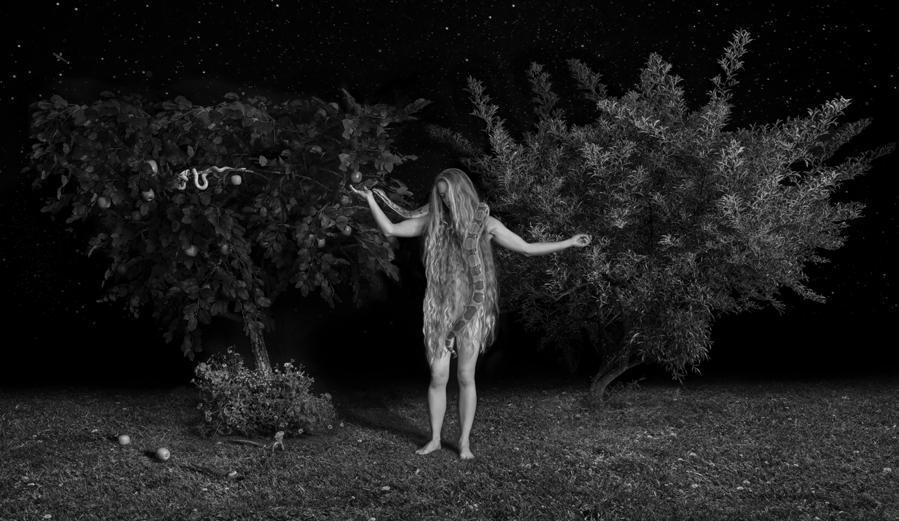 Once upon a time… the wicked witch was Lilith, Queen of the Demons, the magical apple came from the Garden of Eden,

and the first Rapunzel was Princess Keziah, daughter of King Solomon, locked in a tower waiting for true love…

The Museum of Jewish Montreal invites you to its new exhibition Snapshots from the Garden of Eden by Canadian contemporary artist Dina Goldstein to discover the unexpected parallels between well-loved fairytales and the oft-overlooked but rich tradition of Jewish fables, in relation to contemporary issues and themes.

Snapshots from the Garden of Eden reimagines, through a series of stylized photographs, modernized versions of Jewish tales collected in the book Leaves from the Garden of Eden by award-winning folklorist Howard Schwartz. Known for her inventive reinterpretations of cultural symbols, Goldstein’s Snapshots reframes Jewish fables both famed and overlooked. Through her work, the history of Jewish folklore is catapulted into the modern era through a cast of characters and film noir-esque scenes that consider questions around technology, desire, death, and identity, exploring folk narratives and cultural symbols with clever allusions and irreverence.

Snapshots from the Garden of Eden will be on display from February 20th to May 17th, 2020 as part of the Museum of Jewish Montreal’s 2010/2020 contemporary art exhibition series Inside/Out.

Join us for the Vernissage on Thursday, February 20 from 7pm to 9pm.

The Museum of Jewish Montreal is an innovative place to connect with Montreal’s Jewish life and identify, share our diverse heritage, and create new cultural experiences. Our 2019/2020 contemporary art exhibition series Inside/Out, examines what exists in the space between inside and out, personal and public, or real and imagined. The Inside/Out exhibition series has been made possible through the Shaping our Future Grant, thanks to the generous support of the Jewish Community Foundation of Montreal, the Nussia and Andre Aisenstadt Foundation, and Federation CJA.

Image: Dina Goldstein, The Tree of Life and the Tree of Knowledge, 2017
+ Google Calendar+ iCal Export