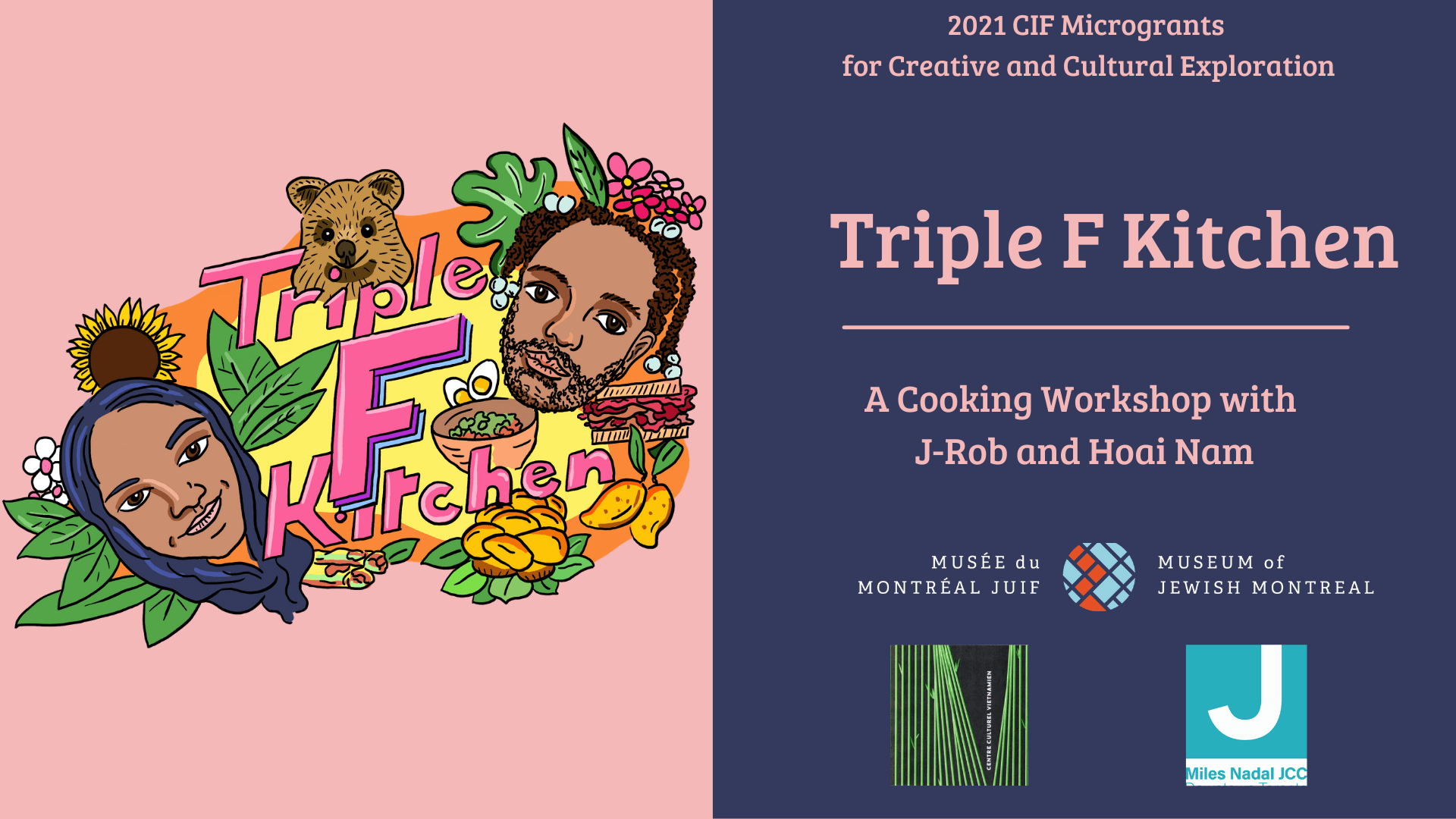 French to follow//français à suivre
The Triple F Kitchen is a collaborative online cooking workshop presented by good friends and collaborators, J-Rob and Hoai-Nam Bui through the Museum of Jewish Montreal. The Triple F Kitchen stands for Friendship, Fusion, Food. Hoai-Nam and J-Rob were two roommates in Montreal from different backgrounds, J-Rob being Black and Jewish, Hoai-Nam being Vietnamese-American. They both have a differing relationship with their identity, this also resonates with the way they connect with food. For her, cooking Vietnamese food is a way to connect to the roots that her and her family have been a long time accustomed to. A taste of the homeland, a connection they strive to keep. For him, cooking foods connected to his Black and Jewish cultures has been a way to reclaim and reinvent traditional spaces that he doesn’t see himself represented in. A taste of a home that he is working to create, a connection that he is striving to build.
For this edition of Triple F Kitchen J-Nam will be revealing and demonstrating their recipe for a Jerk Brisket Spring Roll! The first 20 to register will also have the option to receive a flyer to memorialize the event that will include Triple F’s new graphic, the recipe and back story of J-Rob and Hoai-Nam’s venture into creating the Triple F Kitchen!
Click Here to reserve your tickets on Eventbrite

This event is an independent project developed through the Museum of Jewish Montreal’s Microgrants for Creative and Cultural Exploration.
This event is generously funded by the Morris and Rosalind Goodman Foundation and the Community Innovation Fund. The Community Innovation Fund is financed in part by the Government of Canada’s Social Development Partnerships Program –Children and Families Component and is part of the Action Plan for Official Languages –2018-2023: Investing in Our Future. The fund is managed by the Quebec Community Groups Network (QCGN)
Thank you to our promotional partners at the Centre Culturel Vietnamien and Jewish& at the Miles Nadal Jewish Community Centre
+ Google Calendar+ iCal Export