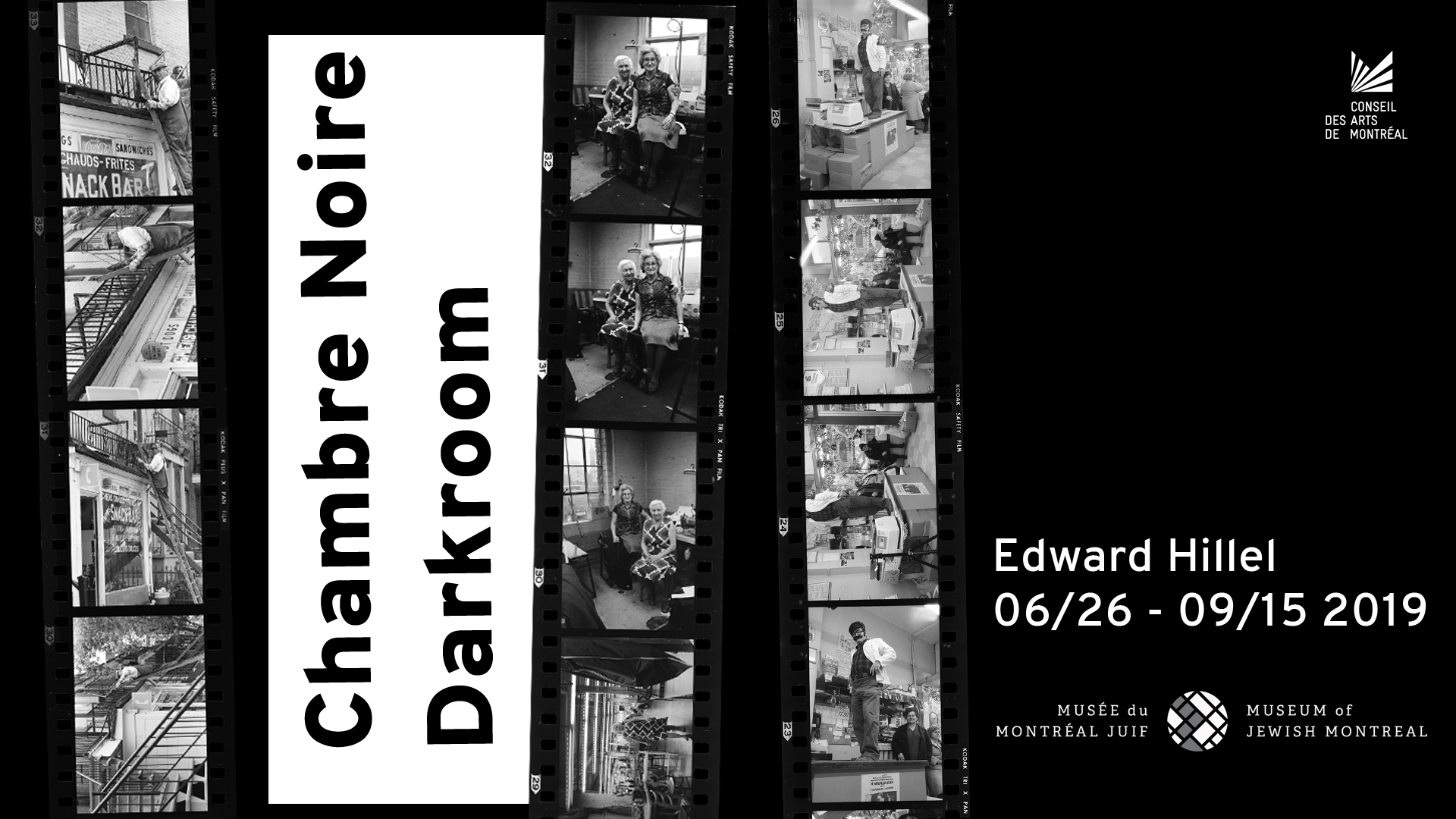 The Museum of Jewish Montreal is thrilled to present Chambre Noire/Darkroom, an immersive art installation by photographer and multidisciplinary artist Edward Hillel. Using archives from his critically-acclaimed 1987 book The Main: Portrait of a Neighbourhood, the artist invites the public into the intimate setting of a figurative darkroom, offering a glimpse into his creative process while reflecting on time, memory and photographic practice. Darkroom/Chambre Noire will run from June 26th until September 15th, 2019.

The Museum of Jewish Montreal, a contemporary cultural hub and meeting point for the diverse communities that have lived and now reside along the Main, is a fitting location for Hillel’s Chambre Noire/Darkroom. The Museum’s gallery space will be transformed into an imaginary darkroom production space, bringing together large-scale black and white film strips, never-before-seen contact sheets, physical and virtual copies of The Main, as well as a monumental participatory map that engages visitors to explore, connect their own dots and share their own stories. At night, the exhibition will come further to life as the red lights of the darkroom beckon mysteriously out from the Museum’s fourteen large windows towards the boulevard at the corner of St-Laurent and Duluth.

Hillel’s installation is further informed by site-specificity as he pays homage to the history and processes of analog photography, and to this former factory building where MJM is located. After the end of textile manufacturing in the 60’s, the building languished until it was purchased by a co-operative of creatives. Since then it has housed many photographers, filmmakers and artists who make a vibrant contribution to the cultural life of the city, the province as well as internationally. No doubt some dark rooms still thrive here.

Born in Baghdad, Iraq, Hillel grew up in Montreal where he lived and worked as a community organizer in the Plateau neighbourhood between 1975 and 1990 while developing his artistic practice. His social activism and involvement in community life inspired him to document this transitional moment through photography and text. In 1990 Hillel moved from Montreal to Paris and is now based in New York. In 2017 the Société de Developpement du Boulevard St. Laurent commissioned him to revisit The Main and create a new body of work, due to be published soon.

Chambre Noir/Darkroom is featured as part of the Museum’s 2018-2019 exhibition series Movement & Migrations, which places importance on sharing stories different than our own, while encouraging recognition of ourselves in the stories of others. In collaborating with Hillel, the Museum of Jewish Montreal is fulfilling its goal in creating multiple entry points for visitors to engage with and find personal resonance in Montreal’s Jewish heritage and its diverse communities through art, as well as creating an inclusive space for visitors of all backgrounds to learn, participate and exchange ideas.